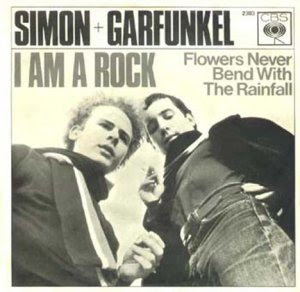 A quanglywangly guitar line ushers in a gentle wistful harmony;

In a deep and dark December

Perhaps unexpectedly the drums come in;

This recording is an object lesson in the occasional advantages of musicians chasing bandwagons. 'I Am A Rock' is a type of song that has to be exceptionally good of its kind not to irritate me. Its premise is built around an obvious irony: Refuting John Donne's claim that no man in is an island, the singer tells us of his isolated and self-sufficient lifestyle, all the time revealing the lonely unhappiness of his isolation, its causes, and concluding with the lines -

And a rock feels no pain;

And an island never cries.

- evidently sung by a man in pain, fighting back tears. Do you see what Paul Simon did there? Its the type of song that I find rather hectoring (perhaps partly for the personal reason that I'm generally considered quite reserved and am certainly an innately solitary man, I do concede).

Simon & Garfunkel were great beneficiaries of the Bob Dylan boom of 1965/6, when not only was the man at the prodigious height of his powers (writing brilliant song after brilliant song, going wild and electric, the familiar thrice-told tale), but half of the pop charts were filled with Dylan associates (Joan Baez), Dylan songs (The Byrds, Cher, Manfred Mann), Dylanalike songs (Barry McGuire, Sonny Bono), even an implausible "British Dylan" in the form of Donovan. In such a climate, a folk duo like Simon & Garfunkel could be remoulded by their management into a renowned and commercial rock act, simply by hiring Dylan's band for the day to overdub 'The Sounds Of Silence' with guitars and drums, transforming it into an up-to-the-minute sound-of-the-moment hit.

There are two versions of 'I Am A Rock' in circulation. Here's the original acoustic version;

For me, something rather alchemical happens to this once the generic 1966 arrangement gets added into the mix: the music starts to challenge the meaning of the song. The tone of defiance in the vocals at the chorus ("I am a rock! I am an II-II-IIS-LAND!") is counterpointed by the chime of the guitars and the swoop of the hammond organ, which become choppy waves and eddies lapping around the rock of elective isolation. In this context, being a rock or an island starts to sound very exciting state of affairs, even rather fun in a way. Despite being intellectually invited to distance ourselves from the singer, the listener is encouraged to empathise with the considerable pleasures of solitude; the snow outside the window, the book-lined room. These consolations can be very real and satisfying, I know, though are only really appreciated in moments of calm such as are denied to the singer of 'I Am A Rock'...

The defiance masks a hurt, of course. A change of vocal tone, switching to a reflective and wistful;

Well I've heard the word before;

The organ is skidding about in a freaky fashion under this. The vocals change to punkily defiant;

I won't disturb the slumber!

If I never loved -

I find this moment rather funny, I must say. Indeed, the sulkily adolescent "It's LAUGHTER and it's LOVIN' I DISDAIN!" sometimes makes me laugh out loud. I'm not quite sure if this is quite the reaction that Paul Simon wanted to provoke... Still, these instinctive reactions that I feel whenever I hear 'I Am A Rock' - laughing, singing along, shaking my fists - give his song a lot more bite than a more demure treatment would give it. Its what makes 'I Am A Rock', well, rock!﻿