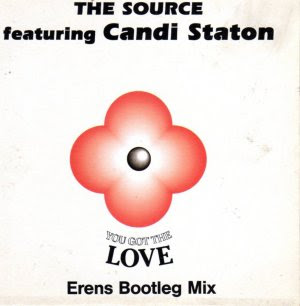 I'm not sure that I've written about a single with so much of an afterlife as this one before. It got to number 4 in 1991, and then remixed to 3 in 1997, and remixed again to 7 in 2006. And that's not to mention the recent regrettable cover version.

I've rarely written about a single from such a modest provenance, either. The recording of Candi Staton used here was made for a keep-fit video in 1986, rather a minor job of work for such a great singer. But Staton's biography is a particularly troubled one, and she would have either been in - or recovering from - one of several terrible marriages, and either addicted to - or trying to recover from - something at the time. She certainly never seems to be very happy about this song in interviews, forgetting that she even sang it for years, feeling that her performance was below par, a guide vocal rather than a proper session.

Which goes to show that proper singers never lose an innate and consummate sense of professionalism - mere mortals dream of singing like she does here! Its a song about redemption, but the redemptive force is inside Staton's voice in the first place, vulnerable and simultaneously full of the prospect of ecstasy. Its a compelling, dangerous, thing to hear, just like in 'Young Hearts Run Free', where the worldly-wise lived experience of awful marriage is offset by the joyous yearning for freedom.

Despite the inauspicious circumstances of recording, 'You Got the Love' got released, and a tiny bit of attention, in 1986 - enough for it to stay in a few people's minds and for them to realise its tremendous potential as a club track a few years later. The sparse house music setting certainly gives Candi a framework to call out to the listener, and makes every moment unremittingly tense;

(There's even a sampled cackle incongruously buried in the mix!)

She's not singing about a boyfriend, of course, she's putting all her faith she has left in God. I wonder what uses listeners of this song have put it to... At a club, you'd play it late into the evening. The sense of desperation and ecstasy in the song mean that it would work best some hours into a night out, when you've had a few emotional knocks and promises by that stage, and were starting to be aware of fatigue.

"When food is gone
You are my daaiily meal
Mm-hm!
When friends are gone I know
My saviour's love iis reeaal
Your loove is real!"

And then this comes on, this voice in the wilderness that suddenly makes everything in life seem much more serious and necessary. Uh, this drug is starting to work now, perhaps that boy or girl might be the one... And Candi's voice, all that suffering and mess and yearning for redemption makes absolute sense. God!

Its the possibility of both sin and salvation. The source of pop's deepest power. Soul music.
Posted by Billy Smart at 08:04