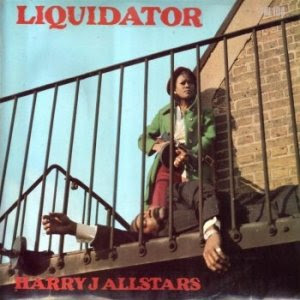 Here's a confession for you - I don't like dub reggae. Indeed - along with all metal recorded after about 1982 - it forms one of the two genres of music that I resolutely fail to enjoy (I can think of a few anomalous exceptions here, but really only a few).

Oh, I understand the appeal in theory - It's about space and absence, isn't it? Dub has a tremendous sense of echo and expanse to it that leads the listener into a deeper sensory experience than can easily be found in other musics. And there's also the absent presence of the excised song, ghostly traces of which still remain in the exposed foundations of the dubscape. I do get this, but it very quickly becomes really boring to me and I start to wish that if not the song, then at least the tune could be brought back and the thing could speed up a bit. Admittedly, I've only smoked marijuana about six times, but I think that even if I was toking then I'd want to listen to something that I already liked in the first place.

So where does Liquidator fit into this complicated apologia? I present this glorious thing, a real played it a million times deathless Billy classic, as an illustration of something that has all the space and depth of dub, but also - crucially - a fantastic tune.

It works this way because of the interplay between the lead organ and the rest of the music, a kind of duet. The rhythm is quite surprisingly slow, but the organ sounds quite perky, like a dog bounding along next to a tractor. But the organ line is also a bit queasy and churning. How does this think manage to sound both skippy and crisp but also simultaneously murky and dank?

A weird thing about this single is how it feels to come completely out of time, seeming equally to belong to both the fifties and the nineties...

A long cultural afterlife for this; the introduction reworked by the Staple Singers for peerless soul-gospel classic I'll Take You There, played before matches by Chelsea, Wycombe, West Brom and Wolves, covered by The Specials on the number one Special AKA Live! EP. Again, a multiplicity of interpretations, The Staple Singers give us a righteous and politically-charged vision of love, while the Specials give us something dangerously riotous - and playing the single has sometimes been banned at the Hawthornes and Molyneaux by West Midlands police as too inflammatory in a climate of tribal local football hatreds!

A simple tune, endless paradoxes.
Posted by Billy Smart at 06:29