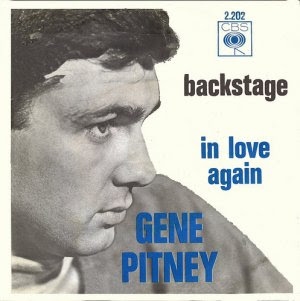 I can never understand why Gene Pitney doesn't have the same kudos as Roy Orbison. Both men worked within the same form, the highly melodramatic ballad, and both used highly distinctive voices to extract the maximum possible emotion out of their material. Both singers also always came across as being genuinely humble and modest in interviews.

In Pitney's case, the voice is a quavering adenoidal tenor, purpose built for the expression of anguish. The amazing thing about this voice is that it will build and build throughout a song, and then - just when the listener thinks that things couldn't possibly get any more exciting or compelling - build some more, reaching a kind of delirious catharsis.

The songs that he interpreted were generally short and unhappy. They are usually tales of lost love, or the fear of being about to lose love. When, less often, Pitney sings about finding love, the effect is equally uncomfortable, because he tends to be consumed by guilt at stealing someone's girl or cheating on someone, most famously in '24 Hours From Tulsa'. 'Backstage' is a definitive lost love tale, given a metatheatrical spin through being the story of a successful pop star.

Hubris is swiftly followed by nemesis;

and each night
I seem
to die
a little...

It's taken a while to get there, but the second chorus brings the first extended anguished phrase;

Backstage I'm lonelee!
Backstage I cry
Hating myself
since I let you say -
GOODBYYYYYYYYE!

A middle eight cranks up the tempo, the strings echoing the singer's manic excitement;

Every night a different girl!

Every night a different club!

And yet I'm lonely all the time...

When I hold an in-ter-view!

Can't get you out of my MIIIIND!

The point of self-revelation;

Come back my love!
Come back to me!
I need you now!
So desperatelee!
What good is fame?
It's just a game!
I'd give it awll to be the same

(A trumpet backs that "meeee-eeee!")

She won't be there. Surely that's it?

No. Pitney reminds us of the scene;

And them, that astonishing Roy Orbison trick of taking things one stage further than anyone could realistically expect them to go;

I've found a new layer of poignancy in this song since the 2006 death of Gene Pitney, alone in a Cardiff hotel room, after a show on a comeback tour. When he was found dead on his hotel bed he was fully dressed and looked, according to his tour manager, "as though he had gone for a lie down".