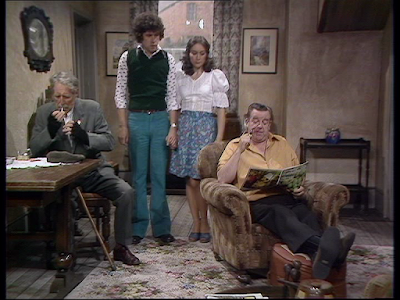 LES: Look at it all. Gloom, muck, desolation. Ugliness.

Only the second episode, and the studio audience are audibly subdued and hesitant at times. You can tell that they're trying to orient themselves around what sort of comedy this is and how it works. It has no familiar stars in it, and the rhythm and object of the jokes feels different to anything else. Peter Tinniswood was one of those writers with his own distinct idiom (none of his characters speak like people in any other programme) and I Didn't Know You Cared doesn't try to iron it out, making a virtue of this peculiarity instead. It's also very Northern/ Yorkshire and working-class, and so presumably harder for the Television Centre audience to quickly identify with.
The audience become more won over by a bravura performance by Vanda Godsell as Carter's soon-to-be mother-in-law. Mrs Partington is a truly appalling woman, mean, judgemental and uninterested in others, traits that are revealed in a near-incessant monologue. Watching and understanding this character makes more sense of the rest of the world depicted in I Didn't Know You Cared, explaining why these menfolk are so gloomy and fatalistic about dealing with women.
Personally, the one thing that really made me laugh in this episode was it's most extreme statement, when a despondent Uncle Mort reflects that, "Still, there's a lot to be said for death. I'll bet it's not half so boring as life."
Posted by Billy Smart at 19:59 No comments:

Email ThisBlogThis!Share to TwitterShare to FacebookShare to Pinterest
Labels: 1970s, BBC, Comedy On This Day, I Didn't Know You Cared 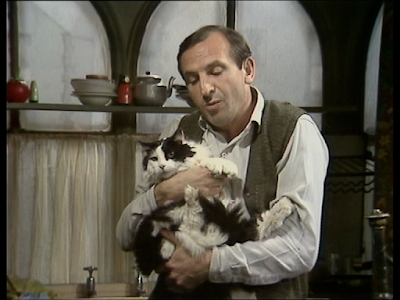 The studio audience are clearly very taken with what they're seeing, with one male and one female laugh particularly prominent. It is noticeable how the one thing that they find most hilarious is the very idea of having to respond to a black man...
Posted by Billy Smart at 21:59 No comments: