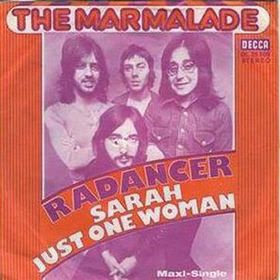 Radancer? What's that supposed to mean? Its not in Chambers, and I'm pretty sure that its not in Oxford, either. I can only presume that Marmalade thought that the new coinage would evoke both radar and radiance.

This is Marmalade's last big hit, and Junior Campbell - the talented one, the singer and the songwriter - has just left them. When he goes, the prospect of making any more recordings of such emotional depth and musical sophistication, such as 'Reflections of my Life' or 'Rainbow', also disappeared. What were the remaining members of Marmalade going to do?

See which way the 1972 wind was blowing and go a bit glam, as it transpired.

This is, in a sense, a very routine song about a dancing girl. The singer sees "a girl on a northern dancefloor", "just sixteen, she could have been more" (perhaps a wise suffix) to whom he goes up to "thinking only of romance". But, unfortunately, she's there "for only just one thing" to dance, which she does with such ability and persistence that the singer doesn't "stand a chance" (despite believing that he could achieve a "close connect- shun" if he displays "genuine affect-shun"). The song has a strong three act structure, though, because in the third verse, he "decided I was really gonna show her - I took a drink and went in to join the fun", where - contrary to the expectations hitherto set up - he is something of a success, or at least bold enough to create a reaction ("The people all stood around watching me lay it down"). Thesis - antithesis - synthesis.

If I sound like I'm mocking this unsurprising tale, the pleasure is to be found in the details of the arrangement. Backing vocals chorus every development in the tale, and the harmonies add an odd Bay City Rollers-type nostalgic effect (so early in pop history!). Handclaps are skillfully deployed, and do continually remind you that this is a dancefloor tale, specifically a northern soul one. And best of all, when there aren't any vocals a clipped rock-out soloing guitar picks up the lead and then quickly stops again before we get more singing.

This single really is a confection - it might be factory made, but sweet and fun.
Posted by Billy Smart at 06:19