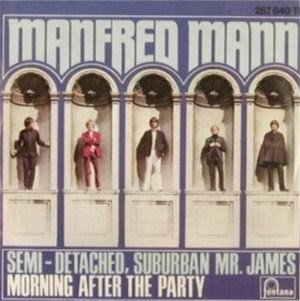 For a band with such a jovial and lighthearted image, the Manfreds convey the unattractive bitter sarcasm of a rejected man with remarkable conviction here.

Its also not a single that ponces about in getting to the point. We get a Morse code flourish of woodwind, and the situation is immediately set up;

There's an unconcealed quality to Mike D'Abo's vocal on this single. Right from the start, every single note of querulousness that can possibly be emphasised is;

So you FINALLY! NAMED the DAY!
when WEDDING BELLS will CHIME!
I was SORR-EEE to HEAR you SAY -
you're gonna be HIS not MI-INE!

This styling is in part the ubiquitous influence of Bob Dylan, and in part D'Abo's South African background. It does a rather better job of convincing you of the strength of the singer's feelings than it does of persuading you - let alone the fiance - of his case;

Do you THINK? you WILL? be HAP-PY?
GIVING-UP? your FRIENDS?

(this next line delivered in rather a fey, mocking, tone)

For your semi-detached suburban Mr JAMES?

There are two tactics being employed simultaneously by the spurned singer here. The first is a rather heavy-handed satirical swipe at suburban mores; "Do you THINK? you WILL? be HAP-PY? BUTTERING? the TOAST?" or "taking DOGGIE? for a WALK?". The only time that this might possibly hit home is in the middle eight, where D'Abo tries to persuade her that she'll be wasting her life as a housewife;

This type of imagery has an unintentionally romantic and wistful pull on a listener of my age, evoking how a small child in the 1970s would see the life of his parents. See also 'Shangri-La' by The Kinks or 'Good Morning Good Morning' by The Beatles for more of this sort of thing.

The second part of the singers argument is more persuasive, but only implicit in the song. The singer positions himself as a much more virile figure than the rather effete fiancee;

He's not just calling Mr James semi-detached because of the marital home that he can provide, but because he can never offer the carnal attraction that the singer can. This dichotomy is accentuated by the arrangement of the final verse and fade-out, where the backing vocals for the impending wedding are all ascetic churchy chorals, while the mocking repetition of "Semi-detached suburban Mr James" are underscored by a great blare of grinding urgesome keyboard distortion.

It's just struck me that '59 Lyndhurst Grove' by Pulp is a variation of this song, sung about the same sort of people if they'd been born twenty years later.

This song leaves me wondering where the protagonists would be now. All three people would now be in between about 65 and 70. If Mr James (who, incidentally sounds like the sort of son-in-law that parents hope for) and his wife had stayed together they'd have grandchildren by now. Mrs James might feel that she's missed out on something in her life and through marrying young, but feel that she'd gained more than she'd lost through it. The singer, though... Either he'd still be complaining about how that stupid bitch had sold herself short 45 years ago or would have forgotten her completely. On balance, I think that the second option would be more likely, but makes for a less satisfactory narrative. Either way, I'd much rather meet Mr and Mrs James than him.
Posted by Billy Smart at 05:09